New Bills assented by the President 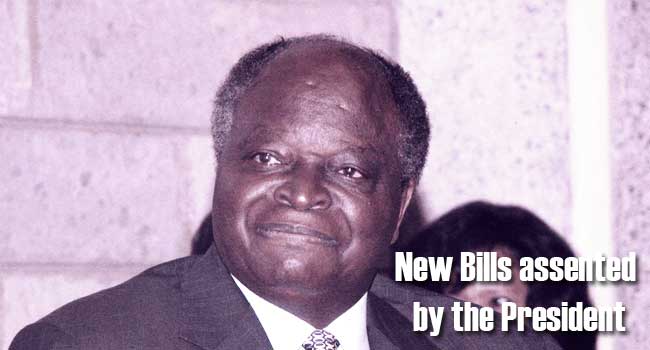 On 24th July 2012, President Mwai Kibaki assented to various Bills which play a crucial role in realizing Kenya's social, economic and political growth. The Bills are as follows:

➢ National Authority for Campaign Against Alcohol and Drug Bill

The Cancer Prevention Bill 2012 as passed by Parliament is aimed at boosting access to cancer treatment and care. Under the Bill, a National Cancer Institute is established in order to promote and secure establishment of hospitals, vocational treatment and care centres for treatment and care of cancer patients. It also seeks to help in the spreading out cancer treatment facilities and in training more oncologists. Cancer has become one of the main causes of death in Kenya with 82,000 cases being reported annually.

The Bill aimed at giving effect to Chapter Eleven of the Constitution which makes provisions for a devolved government; to provide for county governments powers, functions, and responsibilities to deliver services and to provide for other related purposes.

The Bill was out to promote transparency and accountability in the management of public finances at the National Government and County Government, overseeing the Parliament and county assemblies including the different responsibilities of government entities and other bodies.

National Authority for Campaign against Alcohol and Drug Bill 2012

The Bill sought to co-ordinate the implementation of the National Action Plan on curbing drug abuse by citizens of Kenya. It also promotes collaboration with other institutions, agencies or organizations, facilities for coordination of public education against drug abuse.

The presidential assent of the Bills now makes them Laws/Acts of parliament.