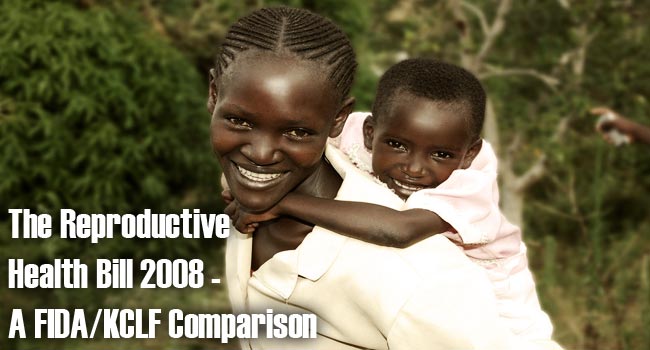 A bill now before Kenya's parliament would legalize abortion, making Kenya the first East African country to do so. The issue of abortion is highly emotional in Kenya. Women's groups argue that the Reproductive Health and Rights Bill will protect women from death and injury due to backstreet abortions, while critics say abortion violates African traditions and culture and is being pressed by Western interests.

According to Kenyan government figures, 300,000 backstreet abortions are performed in the country yearly, with 20,000 women being hospitalized due to abortion-related complications. It is numbers like these that propelled the Federation of Women Lawyers, or FIDA, to help draft the Reproductive Health and Rights Bill 2008, which seeks to legalize abortion.

The Kenyan Christian Lawyers (KCLF) wrote an alternative bill, one which protects both the woman and the child.

THE FIDA DRAFT
It only recognizes the right of individuals of couples/individuals to freely decide the number spacing and timing of their families without recognizing the right of the unborn child.
The unborn child's right to live is put subject to the rights of the couple to decide when to have children.
Implication - Abortion is an acceptable way of deciding the number, spacing and timing of children.

2. Object and purpose of the Act
Almost Similar Objects but the KCLF draft takes a more specific approach as opposed to FIDA's broad and often ambiguous definitions.
The KCLF draft ensures that there are no doubts as to the scope of the Act. (see and compare both drafts)

3. Definition of adolescent
THE FIDA DRAFT
It lowers the age for adolescents thus exposing our children to contraceptives when they are still very young. This will increase sexual immorality when they are young.
Implication - Our children as young as 10 years will be exposed to contraceptives and abortion related services. This could lead to immorality and sexual promiscuity at an early age.

THE KCLF DRAFT states that Herein life begins at conception.
Implication - The unborn child has rights under this act the most important being a right to life.

5. Definition of Reproductive Rights
THE FIDA DRAFT
It includes the freedom to decide freely and responsibly the number, timing and spacing of children.
Implication - This definition is broad enough to encompass abortion as a means of deciding when to have child.

THE KCLF DRAFT
It limits the definition to only high quality and affordable reproductive care. This definition recognizes the need for Kenya to provide high quality reproductive health care and make it accessible to couples.
Implication - It ensures that couples have freedom to prevent pregnancy using only quality and affordable family planning services.

6. Termination of pregnancy
THE FIDA DRAFT
This section provides for the basis of abortion. It provides the grounds for abortion (i.e. when a mother's mental health is at risk or when the pregnancy is as a result of rape, incest or defilement.) This will open the door for women to undertake abortion.
It opens the door for a variety for untrained persons to undertake abortion. The definition of Health care service providers is too wide and leaves open for untrained persons to perform abortion.
It makes it compulsory for a health care provider who refuses to perform an abortion (also referred to as 'a conscientious objection') to refer the pregnant mother to someone who does. This will force Christians (or those who oppose abortion on moral grounds) to aid in the killing of an unborn child. This violates their right to religion and their freedom of conscience.
Implication - Women will be using this provision to undergo abortion. Abortion rates are likely to soar if this section is implemented.

7. Centres for Crisis Pregnancy Management
THE FIDA DRAFT
Does not provide for Centres of Crisis Pregnancy Management. Instead, it provides a situation where a health care provider merely advises a pregnant child to obtain parental consent to undergo an abortion. It is not compulsory that the child should obtain parental consent.
Implication - Pregnant children can perform abortions without their parents ever knowing about it or consenting to it. This will undermine parental responsibility and cause division within the family.

THE KCLF DRAFT
The government shall establish BSDC where women who cannot take care of their children (below the age of 6 months) can deposit them in a crib set aside in every government hospital. Rules and regulations are set out to govern the way these centres would work.
Implication - Decrease in the number of illegal abortions because mothers have the option of giving away their children if they cannot take care of them.
It will reduce the unsafe and often dangerous practice of mothers leaving their children in rubbish bins or other unhealthy places for fear of prosecution.

9. Confidentiality
THE FIDA DRAFT
Considering the whole Act this section is likely to be used to the detriment of the family setup.
Implication - A pregnant wife can undergo an abortion without her spouse ever knowing or ever consenting to it. If the aggrieved spouse should learn about it, it would cause tension in the family (perhaps even a divorce).
Pregnant girls will perform abortions without their parents ever knowing about it because such information is protected by this confidentiality section.

10. Female Genital Mutilation
THE FIDA DRAFT
These sections are not comprehensive and cannot be used as an effective way of tackling FGM.
Implication - These sections will not help tackle the problem of FGM

THE KCLF DRAFT
It provides a comprehensive way of tackling FGM. In dealing with FGM, the government must
Take measures to reach out to communities that practice FGM.
In conjunction with other groups must seek to provide alternative rites of passage as a way of bridging the gap between culture and safe modern practice.
Implication - To tackle FGM, it is not enough to jail those who have committed the offense because it is cultural issue. One must provide an alternative rite of passage otherwise the practice will continue albeit the law against it.