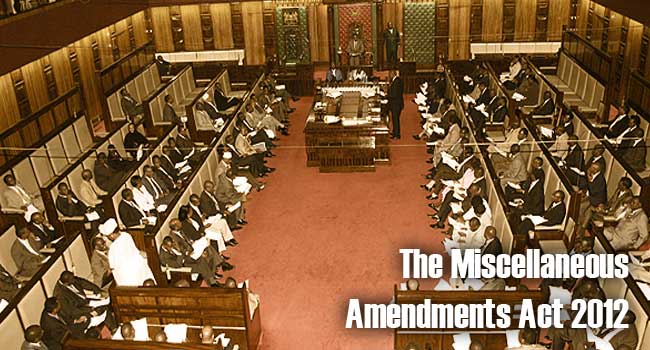 This is an Act of Parliament that was passed to make minor amendments to statute law. The passage of this Act, serves to underscore the government's commitment to watch out for any lacuna in the law that might serve to impede effective governance and thus undermine the implementation of the Constitution.

The President assented to the Statute Law on the 6th of July 2012.

Earlier on, there were a number of very controversial amendments that had been introduced. These amendments included the amendment of the Political Parties Act 2011, the Elections Act 2011 and the Vetting of Judges and Magistrates Act 2011. These amendments had the effect of negating the very constitutional principles upon which they were enacted. Many were therefore strongly opposed to the amendments. This is because the current parliament is on its last days before the General Elections thus the amendments were being made with a measure of bias and self interest.

The President however assented to the Statute Law (Miscellaneous Amendments) Act after Parliament deleted clauses that sought to legitimize party hopping and a mandatory degree for Member of Parliament.

Parliament also deleted clauses of the Election Act, which raised the minimum qualification to hold political office to the level of university education.

The Act also contains a raft of other significant developments. Some of the changes that come with the Act include;

The controversies that accompanied this omnibus bill, is a clear indication of why Kenyans should pay closer attention when new laws are being made. The parliamentarians were going to sneak in laws that were motivated by their own selfish interests and had it not been for the public outcry that followed, they probably would have succeeded. The need for extra vigilance cannot be over emphasized.