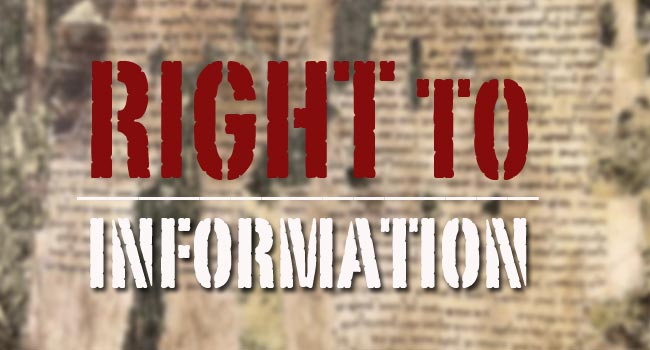 Article 35 in the Bill of Rights says every citizen has the right to access to information held by the state or any information that is held by another person and that is required for the exercise or protection of any right or fundamental freedom.

The Government must wake up to the new reality borne by the Constitution that gives a great sense of being to transparency and accountability. Being a Constitutional right, access to information takes precedence over any other law such as the Official Secrets Act, which has been used repeatedly to hold back vital public information thus fuelling a facilitative environment for corruption and impunity to thrive.

The right to access of information is based on the understanding that without access of information, the achievement of the higher values of democracy, rule of law, social justice set out in the preamble to the constitution and Article 10 could not be achieved unless the citizen has access to information. Openness and transparency in public affairs must be embraced as a core value. A culture of secrecy is no longer feasible and that to be more effective and responsive, information must be made open to public scrutiny.

Kenyans are still in the dark on the outcomes of various corruption investigations and commissions of inquiry such as the Commission of Inquiry on the activities of the Artur brothers (Kiruki Commission). In 2006 President Kibaki appointed this commission of inquiry that was chaired by former Police Commissioner Shedrach Kiruki. The Artur Saga hit the headlines early that year when they were allegedly brought into the country by rogue government officials in response to the seizing of 1.1 metric tones of Cocaine. Recently, there were some shocking revelations made by an investigative news series, which was aired on the Kenya Television Network (KTN) that left many Kenyans puzzled. A number of high profile individuals in Government were said to have been involved in illegal activities that were carried out by the two mercenaries who were the subject of the Inquiry, but were never prosecuted. Some of the government officials who were adversely mentioned are still holding key public positions in the government. This would not have been the case had freedom of information been made the rule. Several graft scandals in the public sector would have been averted if interested parties and the public had open access to information on various processes such as budgeting, allocation and expenditure of funds, procurement of goods and services, vetting and appointment of public officers among others.

Perpetrators of impunity and corruption would be exposed. It would also be the key that would open the door to critical information that would be required to hold public officials accountable. The right to information would help build a bridge between the government and the public. It would also keep the government honest, allowing the people to act as their own best watchdog.

The need to put a closure to such scandals is critical in helping the country move forward. Billions of tax payer's money has been spent on these inquiries but no tangible result has ever been achieved. Most of the reports are gathering dust in government shelves. True justice would only be realized if these issues were dealt with by ensuring the perpetrators took responsibility over their illegal actions.

The East Africa Centre for Law and Justice appreciates the fact that there is a constitutional provision on this, and that is an encouraging beginning; however, a well-drafted legislation is important to ensure that the right to information is effectively operationalized. Kenyans must also remain vigilant to ensure proper implementation because of its inherent value and importance. This right has the potential to be of enormous benefit to the people of Kenya. It is a strong tool in the fight against corruption and provides a mechanism for deepening the public's engagement in development activities and strengthening democracy.