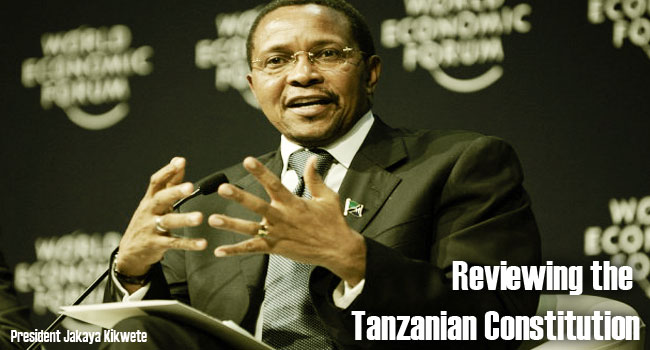 By Ken Mbaabu
Tanzania is going through one of the most important phases in the history of any modern day democracy. This is especially important because it is part of a group of African countries that have had constitutions, whether pre or post independence, majored mostly on freedom, self-rule and deliverance from the shackles of colonialism, rather than on democracy for the people.

A constitution is the fundamental law of any nation. It is an agreement by the people on how they wish to relate with each other and be governed. It is because of this that a lot of resources, time and emotions are associated with any constitution making process. The Tanzanian nation has been always peaceful and it is worth mentioning that it has managed to maintain this peace even during this period when it is reviewing its constitution. This is in contrast to the constitution making process of its neighbor Kenya, which was associated with demonstrations, oppression and even deaths.

President Jakaya Kikwete instituted a 30-member commission that would go round the country to collect the views of the citizens. The commission, which has been received well by the Tanzanian people with regards to its composition, apart from a few fundamental complaints, was expected to start work from the 1st of May 2012 to finish by the end of October 2013. It is then to come up with a proposed draft, which will be presented to parliament in 2014, when the final Constitution Bill will be tabled for debate and approval, before finally being subjected to a referendum.

On a brighter note, the president appointed people from diverse political parties including even his fiercest critics. This should signal that he wants to rally the country together for the common good. The commission that is in place has enormous powers to ensure the success of the whole process. The president, politicians, religious leaders and civil societies have called on all Tanzanians to come out in large numbers to give their views on what they wish to be included in the draft.

As is the case with any major Constitutional Review process, there are many important issues that have arisen and are being supported or opposed by various interest groups. Top on the list are

EACLJ also urges the Commission to rise above all partisan interests, whether they be political, religious or even geographical. This is important if the people of Tanzania are to have the constitution they wish for and deserve. Finally, the International Community should help and guide the Tanzanian people without imposing their own wishes on them.