The Maputo Protocol in line with the New Constitution 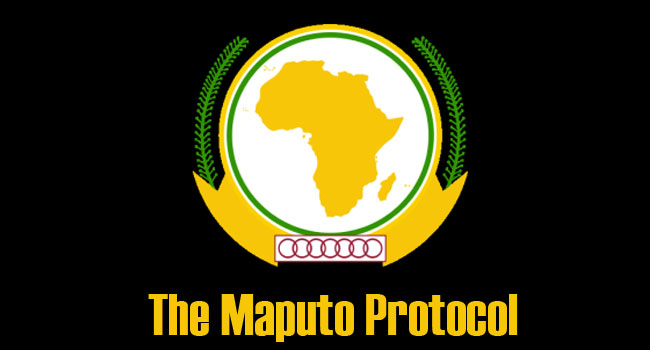 The title of the protocol is Protocol to the African Charter on Human and Peoples' Rights on the Rights of Women in Africa, the name Maputo came about since that's the city were it was signed and adopted by African states.

The Maputo protocol has generated a lot of heat in member state countries with many of the countries taking time before rectifying the protocol. The reason being that the protocol raised a lot of issues concerning family, divorce, marriage, legalization of abortion that did not go down well with the Christian, Muslims and Africans on the above issues.

Other African nations choose to adopt the treaty as it his even after major opposition from their citizens a case in point is Djibouti and Uganda, even after receiving a protest letter from the Catholic Bishops they went on to ratify the treaty without considering their opinions and those of the Ugandan powerful Joint Christian Council, the pope once described the Maputo treaty as "an attempt to trivialize abortion surreptitiously" this is because the Maputo Protocol under Article 14 it describes abortion as a human right issue. The Human Life International describes it as "a Trojan horse for a radical agenda."

Even in Muslim countries there was strong opposition to the treaty on the same issues of abortion and female genital mutilation. In Nigeria, women Muslims gathered in Niamey to protest to what they called "the satanic Maputo protocols" parliament voted 42 to 31, with only 4 abstentions against the Maputo Treaty. The main borne of contention is that the treaty was not in line with the traditions in regard to the age of marrying off girls and abortion.

The treaty has lots of good provisions for the women especially on the areas of discrimination against women, criminalization of violence against women, rights of women on property during and after marriage to be equal to men. It compels all signatories of this treaty to pass legislation to codify all this gains into law. The treaty also compels the government to be giving reports to the Africa Unity on the progress they have achieved on the areas of implementation; this will ensure the gains achieved by the women in this treaty will be achieved.

The new constitution of Kenya under Article 2(6) any treaty or convention ratified by Kenya shall form part of the law of Kenya under this Constitution, go on to make this treaty to have the force of law in this nation without passing any other legislation. Kenya only had reservations on the clauses under Article 6 and Article 7 hence it means all the other clauses formed part of the laws of Kenya on 27th August 2010. These are clauses concerning marriage, separation, divorce and annulment of marriage. Which do not in any way interfere with the cultures of any community in Kenya only in the case were the woman in this case the wife is given the right to ask for divorce under Article 7 (b), which in the African tradition and Muslim religion is the prerogative of the men. This clause did not experience much opposition from people.

The clause that has had a lot of opposition from all the quotas is the clauses found under Article 14 (2) (c) "protect the reproductive rights of women by authorizing medical abortion in cases of sexual assault, rape, incest, and where the continued pregnancy endangers the mental and physical health of the mother or the life of the mother or the foetus". That deals with health and reproductive rights which as similar wording to the Kenyan new constitution under Article 26 (4) "Abortion is not permitted unless, in the opinion of a trained health professional, there is need for emergency treatment, or the life or health of the mother is in danger, or if permitted by any other written law" this clause leaves a grey area on the issue of abortions in Kenya were there are lot of people who have been practicing illegal abortions even before the constitution was passed. There as also been a presence of international organizations that advocate for abortions on demand, abortion being a multi-billion dollar industry the country is at the danger of having abortions which will affect the social and moral fabric of our society.