The Constitution Must Treat All Religions Equally 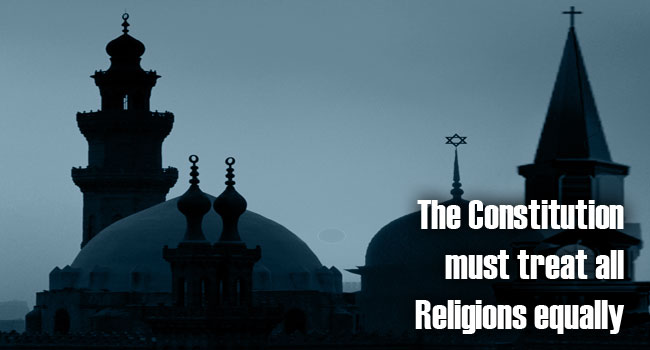 Kenya is a multi faith country

We are a very religious country and even our National Anthem recognizes this fact. Save for a few cases of religious intolerance, people from different religions co exist well with each other in Kenya. It is very important that this balance be kept, and evidenced in the new Constitution.

The Constitution has always protected the freedom of religion

The current Kenyan Constitution provides for freedom of religion, it also provides that nobody shall be discriminated against by reason of their religion among other things. The new Constitution should give equal, fair and just treatment to all Kenyans.

Until now... all versions of the proposed new Constitution (since 2002) have consistently stated that

In the latest draft... these provisions have been changed!

The latest draft has dropped the statement "all religions will be treated equally".

The draft only states that "There will be no state religion"

So why were these important clauses removed? Who instigated these changes and what are the implications?

Why is Islam being recognised as superior to other religions?

In the section on the Judiciary, the Draft states that "there will be Kadhi Courts" it also states categorically that "a person shall not be qualified to be appointed to hold or act in the office of Kadhi unless that person professes the Muslim religion"

No other religion is recognised in the Draft.

Should the Constitution create a State office for which only a person from one specific religion can apply?

A Constitution cannot correctly create such an office in a multi religious country. A person seeking a State funded job in Kenya cannot be disqualified on religious grounds. Every citizen regardless of his/her faith MUST be able to occupy any office of State.

The Kenyan Muslims are no different from other Kenyans – they deserve every protection of the law.

Like every citizen, Kenyan Muslims are entitled to practice their religion in the best way they know how. Muslims deserve and must have their systems of dispute resolution. Their right it to have must be protected by the Constitution. Disputes relating to personal law such as marriage, divorce e.t.c. may be determined by Muslim courts.

It favours one religion over others by providing for State funding of a purely religious system of dispute resolution. It creates state offices that are only accessible to one faith group, it perpetuates a historical wrong.

The State must not fund a religious institution and observance.

But haven't the Kadhi Courts always been in the Constitution?

Yes. The Kadhi courts have been in the constitution since independence. There was a historical reason and context for this. An agreement between Jomo Kenyatta and the Sultan of Zanzibar was intended to ensure that the rights of Muslims along the coastal strip would be protected when Kenya became a republic. What was then a concession to a small part of the country and a very small part of the population is now leading to a demand for special treatment of all Muslims throughout the whole country.

Why open up a Pandora's box?

We should anticipate that the many religious groups in Kenya could begin to demand state funding for all manner of religious activities such as:

The point is, creating one religious institution in the constitution means the state must be prepared to create others.

the right of every person of religion to exercise his or her faith must be protected. The bill of rights provides for freedom of worship. All Kenyans must be protected from discrimination by reason of their faith or lack of it. This is achieved by the provision of freedom from discrimination. Beyond that, everyone must practice their own religion in their own manner, buildings, creating their own institutions and most definitely, at their own cost!

What will Muslim's lose if the Kadhi courts are not in the Constitution?

The role of the Kadhi as a religious office will remain intact – organised and funded as our fellow citizens who are Muslim will have chosen. There is no need to legislate ant religious courts. They exist by virtue of religion and will continue, bora tu, uhuru wa kuabudu uzingatiwe.

What is the right thing to do?

When the government puts its imprimatur on a particular religion it conveys a message of exclusion to all those who do not adhere to the favored beliefs. A government cannot be premised on the belief that all persons are created equal when it asserts that God prefers some