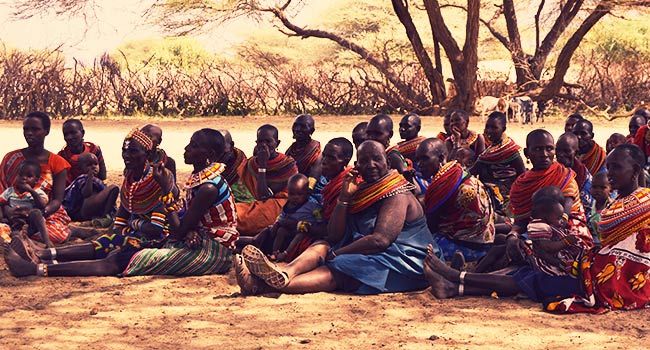 The EACLJ conducts civic education with a focus on marginalized communities which have limited access to information and services; either because of their proximity or their lack of education opportunities.

We have been working within the Samburu community, conducting civic education, in a bid to end the practice of retrogressive cultures and to empower the people on their rights and responsibilities. Samburu is one of the communities in Kenya which still condone inhumane practices. In this day and age, practices like female genital mutilation (FGM), beading and forced early marriage should not be happening to girls and especially as young as 9 years old.
Violation of human rights, and especially women rights in Samburu is fueled by the fact that it is an extremely patriarchal society. However, at the EACLJ we recognize that human rights ought to be respected over and above the community laws that are in place.

While working in Samburu, the EACLJ has made an impact, which includes rescuing girls who had been married off too early and or forced to undergo female genital mutilation (FGM). This has been with the help of our partners Samburu Girls Foundation.

Early forced marriage, as seen in the video is affecting many young girls, cutting short their childhood and in some cases their lives in totality. We made this video to tell a story of a young girl who was forced into early marriage, but survived and managed to join school.

The issue of child labor is huge in Samburu County. At the EACLJ we are determined to change the narrative and help the children, by teaching the community that although a parent can be assisted by their children, it should not be forced and should not deny the children their rights. The video shows how children in Samburu are subjected to hard labor and forced to stay out of school.

The right to education is not only a law in Kenya but also an international law, which must be observed. Every child deserves an opportunity to receive basic education despite culture and traditions. This is important to help them in making informed decisions about their future. The EACLJ is proud to be involved in advocating for the Right to an Education in Kenya.