The BBI Case Before The Court of Appeal 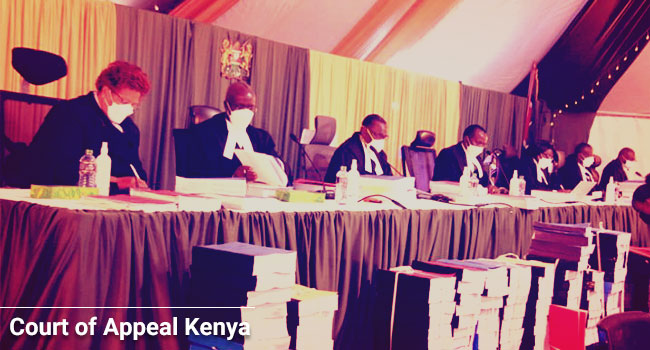 For four days last week, the country’s top legal minds made submissions before the Court of Appeal in a case that is meant to either uphold or overturn the recent High Court ruling that nullified the BBI (Building Bridges Initiative) Bill.

Nine issues were brought before the seven-judge bench, the most contentious one being whether or not the President and other parliamentarians could initiate a popular initiative vote to change the constitution.

The BBI Bill is a piece of legislation that is meant to amend the Constitution of Kenya. It was launched by President Uhuru Kenyatta and the former Prime Minister Raila Odinga as their way of solving the issue of post-election violence.

According to the Constitution, there are two ways to change the Constitution. The first would be to amend by Parliamentary Initiative, where a Bill is introduced in either House of Parliament, voted on and passed by not less than two-thirds of the members of each house. Both houses have to vote and pass the Bill. There is some restriction on how some sections of the Constitution can be amended in this manner.

The second way to change the Constitution is Amendment by Popular Initiative. A Draft Bill (or a general suggestion which will still later have to be made into a draft bill) is proposed to the people. The organizers/initiators of this Popular Initiative then have to convince at least one million registered voters to sign the document as proof of their support for it. After the IEBC (Independent Electoral and Boundaries Commission) has verified the signatures and are satisfied that every requirement stipulated has been met, it will present the Draft Bill to each County Assembly. If a majority of the County Assemblies approve the Bill, it will be introduced in Parliament. If the Bill is then supported by a majority in both Houses of Parliament, it will be submitted to the President for assent. If however the Bill is not passed by either one of the houses, or if it contains some clauses that pertain to changing some restricted sections of the Constitution, then it shall go to a referendum.

The initiators of the BBI (Constitution Amendment) Bill chose to go with the second method, i.e. the Popular Initiative. The opponents of this Bill argued that the President has no right to initiate a popular initiative because it is meant to be reserved for private citizens. The point being made is that the President has access to state machinery as well as direct access to the National Assembly and the Senate, therefore, he should have used the first method, i.e. the Parliamentary Initiative. The proponents of the Bill say that the President did not lose his constitutional right and responsibilities as a citizen when he ascended to office.

There are certain clauses in the Constitution that have some restrictions. This means that they cannot be changed unless they are subjected to a referendum. The BBI Bill happens to contain clauses that would affect these sections of the Constitution, so the President and other initiators could not use the Parliamentary Initiative. For example, if a Constitutional Amendment Bill touches on the Bill of Rights, or the Term of Office of the President, or the functions of Parliament or the devolved Government, then it doesn’t matter who initiates it. It must go to a referendum at the end of the day.

The other point of contention before the Appellate Court is how the BBI Bill has been framed. Should the Bill be one single question, or a series of multiple questions? Should it be one big bill where everything is either all in or all out? Should a referendum be about a singular question, or should each issue be considered as a separate question?

The provisions of the Constitution need for legislation to give them life. Kenya currently does not have a referendum law. What is currently in place is the Elections Act 2017, which is too lean and therefore inadequate to handle such a massive thing like the referendum being proposed by the BBI Bill.

The Court of Appeal is expected to deliver its judgment on the 20th of August 2021.