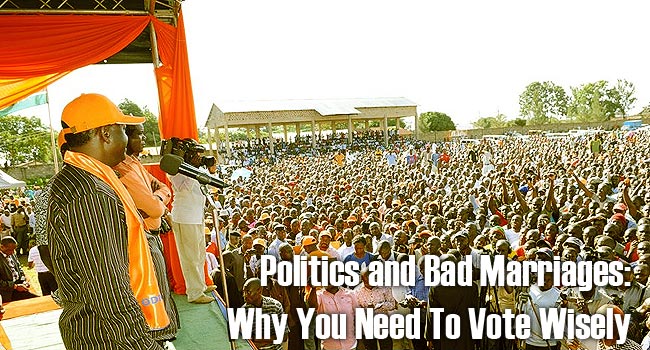 Politics and Bad Marriages: Why You Need To Vote Wisely.

If you have lived long enough, you most likely have seen it. A lovely couple, a beautiful wedding, a couple of years... a tragic divorce. What on earth went wrong... people wonder. Then the older and wiser ones in the group tell them. These people got married for all the wrong reasons. Perhaps the man was rich and the girl was beautiful. He was charming and she made the perfect trophy wife for him. Her beauty made her the perfect wife for him. He loved the attention she him from his friends, and he loved the attention she always gave him. She enjoyed the expensive gifts and the fancy restaurants. She also enjoyed the envious looks she got from her girlfriends when he came to pick her up in his expensive sports car. But after the wedding, reality soon hits their utopia. The same restless ambitious nature that got him his wealth begins to work against them. Suddenly he gets bored of her. The thrill of the chase is over and he yearns for another challenge.

She begins to notice his detachment. Slowly the husband of her dreams turns into a man she can't recognize. The dates to fancy restaurants become scarce and the steady stream of gifts begin to dry up. She begins to nag him about his coming home late and he begins to resent her. Soon burst ups are a common thing between them and before they know it, they are in front of a judge... in the middle of a bitter divorce. All this could have been avoided if they were looking for the right thing in their partners. If they understood their destiny and purpose on this earth, then they would have chosen someone who compliments them better in that purpose. They would have chosen someone on the same path in life as them and they would have headed down a long and successful road in marriage together. A path that wasn't dependent on money or beauty. But a path that is dependent on vision, character and friendship.

Now. What has all this got to do with Kenya and the coming election? I am glad you asked. If you think about it for a minute, you will see that the situation between the voter and the politician isn't that different from the one between the man and the woman in the story. During the campaign period, the rich politician woos the attractive voter with immediate financial gratification and further fantastical promises of a bright future together. For a while the voter enjoys the attention of the politicians. Helicopter visits are the order of the day. VIPs show up with shiny limousines and full pockets, ready to share the 'wealth'. Mesmerized, the voters flock to the political rallies to support 'their man'. This is the right leader, they believe. After all... look how rich he is. He will represent our people well in the big city. Our constituency will be the envy of the other constituencies because our leader will most definitely get an important ministerial position in government. This will look very good for 'our people'. So trapped in this thinking... they gleefully vote in 'Mr. politician'. The wedding goes through so to speak. Once Mr. Politician is in power... he now has what he wanted. His trips back to the village become scarce. He begins to resent his constituents. They are always asking for handouts whenever they see him. Almost every one of them has a personal problem they want him to solve. A sick wife here... some school fees needed there... they are always hanging around his rural home, hoping that maybe this weekend he will visit. Sadly... the voters fell into the same trap of myopic thinking that the rich man and beautiful woman in the story fell into. They voted in the politician for all the wrong reasons. They weren't thinking of the big picture. They weren't thinking of the important issues like development, proper governance, good policies and integrity. The long term future of the country was the last thing on their mind.

I find it sad when I hear Kenyans say things like, 'election time is the one time I get to directly benefit from the politician – so he better pay up at the rallies!' These people tend to measure the value of the politician by how much money and clout is thrown around. I have been told of genuine leaders being heckled off stage because they did not give the 'mwananchi' some 'kitu kidogo' first. The people weren't interested in development agendas or visions for the way forward. On the national scale, it is also very sad that a significant majority of the electorate keep voting in the same leaders due to their affiliation to their tribe. When you hear statements like, 'we need to consolidate our *insert big tribe here* vote', or 'our people shouldn't enter *such and such* coalition because we will not get a big enough share of the pie' – you should be sad. Such thinking like 'our tribe is getting a raw deal' or 'our man is being taken to The Hague' should be discouraged. That sort of thinking is myopic. Kenya is bigger than coalitions. Kenya is bigger than politicians and Kenya is certainly bigger than any one tribe. We need to be more nationalistic in our thinking if we are to prosper as a country. This doesn't mean we let go of the uniqueness that our different 42 tribes bring to the fore... it means that it is only with a nationalistic outlook that can we appreciate those unique qualities. They can then be our strength as a nation. We have a great destiny as a nation... and the one thing that can threaten that destiny is us and the leadership we vote in. We have a beautiful land, we have beautiful people and now we have the natural resources as well. All we need to do is find the right leadership who can walk with us into that destiny. Otherwise... as we witnessed in the 2007 post-election violence... we could find ourselves right in the middle of a bitter divorce. And as any divorcee will tell you, that is one fight that has no winners.