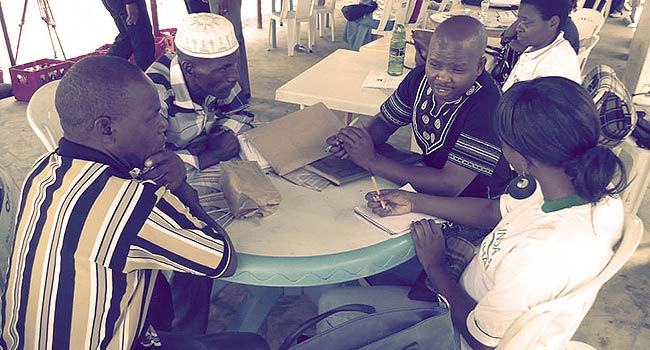 The EACLJ, together with other partners from the Complaints Handling team visited Ngaaie location in Mwingi North Constituency. This trip was to conduct a legal aid forum organized by the Kenya National Commission on Human Rights (KNCHR). The main aim was to educate the locals of their rights and responsibilities, as well as take up their complaints on different violations.

Minerals were discovered in the area and this has resulted to violations on the right to land; due to possible relocation when developers begin to extract limestone in the area. The residents complained of ongoing talks concerning sale of their land, however they were not involved and hence felt short-changed. The women especially felt left out from the land discussions as it is deemed a male affair.

In addition to land issues, there were complaints concerning the rise of domestic violence in the area, as well as neglect of children by parents which is affecting their right to access education. It came to our attention that most of the residents of Ngaaie had no idea where to report violations they faced, so it was an opportunity for them to express themselves and report to different organizations and institutions. All institutions present took time to present and explain their mandates and later we had a one-on-one session with the residents of Ngaaie. We were able to reach many people, both young and old.