The Danger to the Human Rights System 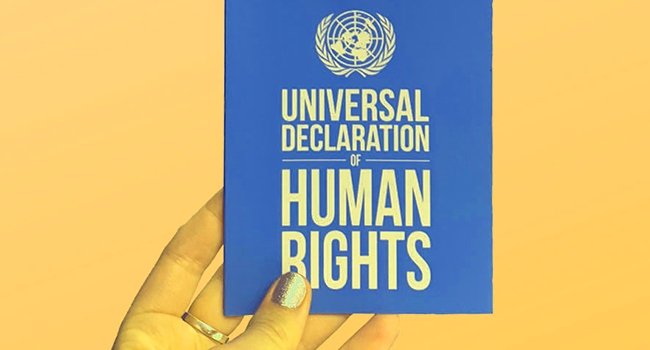 Human Rights are the basic rights and freedoms belonging to every human, from the time they are born to the time they die. They are not dependent on where you born, your personal belief systems and how you choose to live your life. These basic rights are ideally based on values such as equality, dignity, independence and fairness.

Because of the horrible nature of the 2nd World War, (for example, the Nazis in Germany wreaked havoc on its population and beyond), the issue of universal human rights became a priority for the International Community. In 1945, the United Nations was formed and three years later, 50 member states adopted what is known as the Universal Declaration of Human Rights. The idea was to have binding treaties and laws that would ensure basic rights and freedoms guaranteed for every human being no matter which country they were from. Almost every country in the world has accepted the Universal Declaration of Human Rights.

The Human Rights System is there to protect the individual from the State. The architects of the system wanted to provide protection for people who might find themselves under a totalitarian regime (like the Nazis) where the leaders do not respect human rights. International Institutions such as the United Nations and the European Union exist to provide some kind of oversight over member States. The question then becomes, who provides oversight over these international bodies? As John Acton once told his Anglican Bishop, “Power tends to corrupt, and absolute power corrupts absolutely”. There has to be a good balance of power so that none of the International Institutions or Member States exceed their power.

There are fears that these International Institutions may be susceptible to influence from global actors interested in their own ideologies and agendas. Private Foundations such as the Gates Foundation or the Ford Foundation have been suspected of using their billion-dollar budgets to influence systems in these International organizations. The Gates Foundation for example gave a grant of $25 million to UNICEF just a few years ago. These International Institutions need these funds, so they will accept the donations and then let it be known that it was done because they share similar value systems with the benefacting Private Foundation.

When the situation is closely investigated however, it becomes clear that the Private Foundations use their monetary influence to push through their own personal values into the International Institution. Because these International Institutions have a significant global reach, the value system of the Private Foundation now has a way of having a global impact.

The European Centre for Law and Justice (ECLJ) recently looked into the European Human Rights Court to study and investigate just how much influence these Private Foundations have on the International Institutions. There is also a report on their website that looks into and analyses the financing and influencing of United Nations Experts by Private Foundations.

There is an example where in the records of one of these Private Foundations, a $100 000 grant was given apparently to influence a report on gender equality and women’s rights. The money was traced from the Foundation to a smaller feminist organization. This Feminist Organization is also a lobbyist group in the United Nations. The money then found its way to United Nation Experts – these are people within the United Nations structure who write reports on important issues, these reports are important because they influence the policies that are discussed and implemented. United Nations Experts are meant to be independent and under no influence from any party whatsoever. However, for them to meet, travel and investigate for their report, they need a budget. The source of the money for this budget can many times come under question. For example, in this instance, the money in the grant found its way to these people and eventually a United Nations Report detailing the wishes and values of the lobbyist Feminist Organization was made and tabled prominently. These reports are so influential that they have even been quoted as references in cases that are before the European Human Rights Court. This means that their content will have a significant influence on International Law, and eventually, in the legal systems of individual member States.

There are more examples of the far-reaching influence these Private Foundations have on International Institutions. Some Judges serving in the International Court System were actual members of the Private Foundations. According to ECLJ investigations, in the last ten years, 22% of the Judges in the European Court of Human Rights have come from a few NGOs, that have all been funded by the Open Society Foundation. This is very significant for obvious reasons. The Court System ends up becoming an echo chamber that drowns out dissenting voices and opposing views. The Court System winds up losing its impartiality. The ECLJ investigation has revealed that already there is evidence that there is promotion of certain kind of values in relation to abortion, the family and the LGBT.

The Human Rights System needs to be free and fair. It is important to understand the influence these Private Foundations have on the big International Institutions and what kind of impact this is having on society over a given period of time.