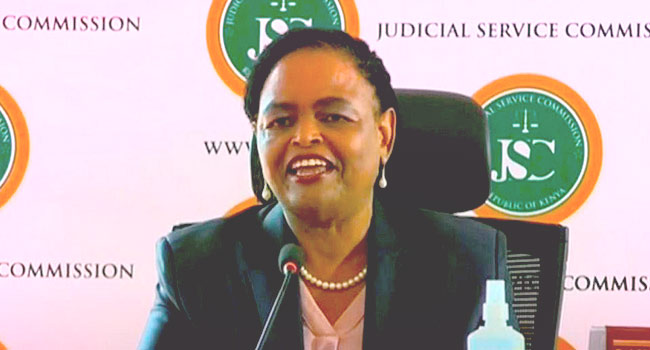 Following her approval by Parliament and then formal appointment by President Uhuru Kenyatta, Lady Justice Martha Koome has been sworn in as the Fifteenth Chief Justice of Kenya. This occasion is significant and historic because Justice Koome also becomes the first woman to hold the position since independence.

Justice Koome is now the administrative head of the Judiciary. She will take a leading role in setting policies that will direct the administration of justice in the country. As President of the Supreme Court, the Lady Justice is now the head of the highest court in Kenya, whose decisions are binding and precedent setting over all the other courts in the country. As Chief Justice, Justice Koome will preside over the swearing in of the President, Deputy President and other government officials. The Supreme Court has exclusive jurisdiction to hear and determine any disputes that arise in relation to elections to the office of the President. This fact came to the fore during the previous elections in 2017 when the previous Chief Justice David Maraga announced the decision of the Supreme Court of Kenya to nullify the Presidential Elections.

Having a female Chief Justice is a huge win for the empowerment of women in the country. It is a significant step in including women in positions of leadership that would allow them to make decisions that determine the overall direction of the country. Women make up about half of the population so it is important that their voices be heard and their views adequately represented as equal stake holders. Men and women also tend to view and think about life differently, so having more women in such positions of power will give them the opportunity to bring their unique insights and perspectives to the table. This is a good thing because it may lead to unique solutions to problems that have been plaguing society for a while.

For example, the Kenyan Women Judges Association, of which Justice Koome was a part of, managed introduce and guide other judges in the High Court and Court of Appeal on the International Human Rights Instruments, which include the Convention on the Elimination of Discrimination Against Women. Many aspects of these international laws have now been added to the Kenyan Law as a result. This highlights how the increased presence of women in the legal profession could lead to alternative views on how the law can be applied to areas that have otherwise been neglected because they might be a bit of a blind spot to their male counterparts.

This is usually evident in the fight for women and children’s rights. Lady Justice Koome is a known advocate for the rights of children and has been instrumental in the establishment of the Family Division of the High Court. In a landmark ruling, she judged that the Teacher’s Service Commission would not be blameless in the event that harm comes to a child in a public school because of negligence. In addition, the new Chief Justice was recently feted as the runner up in the 2020 United Nations Kenya Person of the Year where she was recognized for her work to improve the rights of women and children in the justice system.

The appointment of Justice Koome as Kenya’s Chief Justice has definitely shattered the glass ceiling in a field which has traditionally been dominated by men. Many women can now take encouragement from this historic development and use it as motivation to achieve all that they can dream of. Her appointment also gives hope for a better world for women and children whose rights may not have been adequately advocated for previously.