The Walk to The Ballot 3: The Governor 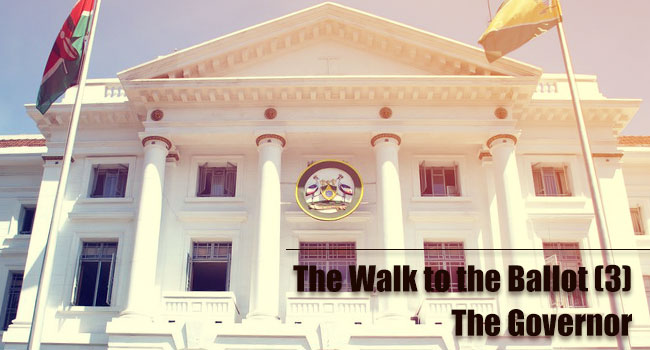 Having marked your choice for the Commander in Chief, it is time to pick a Commander for your County. It's important to note that Devolution is a creation of the new Constitution; We did not have County Governments until after the March 4th, 2013 General election. The distinction between the National and County Governments, headed by the President and the Governor respectively, is based mainly on their functions and the areas of jurisdiction.

The Constitution has made a clear distinction of the functions of the two governments, and it has also made provisions to facilitate co-operation between them. These are contained in the fourth schedule of the Constitution.

To start us off, let us first establish exactly who a Governor is. In the Kenyan context, the Governor is the duly-elected leader of any of the 47 counties in the country. The title is also used by extension to refer to the Chief Executive Officer of the Central Bank of Kenya; you will notice the reference in Kenyan currency notes.

Similar to the President, the Governor is also referred to as 'His Excellency'. I said "His" because we are yet to get a woman Governor but hopefully this will change with the upcoming 2017 elections.

The second thing we need to establish is, who can be a Governor? Again, as it is with the President, there is a strict criteria that one has to meet if they wish to become a Governor. According to the Constitution, the hopeful candidate has to;

It is important that the members of the Independent Electoral and Boundaries Commission (IEBC) are disqualified from being elected if they have held the office at any time within the five years immediately before the date of election.

Finally, this is probably the most important question you need to have answered before you pick the person you want to be your next Governor from the list of names on the Ballot Paper. What exactly does the Governor do?

As it is with the President, the candidate hoping to be Governor has to announce a running mate who shall then become the Deputy Governor upon an election win. The 2013 election was the first General Election since the promulgation of the new Constitution. That meant that it was also the first time people elected a Governor. There was no known precedent on what the Governor was meant to do first. The normal scenario is that after the election, the Governor Elect would embark on forming a County Executive Committee - the Executive Arm of their County Government.

The functions and responsibilities of the Governor are set out in Section 30(2) of the County Government Act and they include among others to:

You may have noticed that the Governor's term is more defined than the President's, but as a result the process of extending their term is less tedious. The Governor will remain in office until the duly elected Governor is sworn in.

In the next part, we will look at the representative seats that is the Legislators...